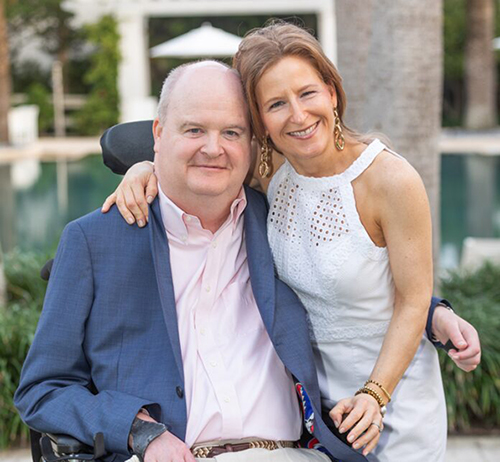 Henry Stifel was 17 years old in 1982 when an auto accident left him paralyzed, unable to walk or use his hands. With support from his family and community, he got on with life, graduating from high school, then college with a degree in finance and pursuing a career on Wall Street.

As a board member of the foundation throughout its history, Stifel followed the work of SCI researchers, particularly UofL professor Susan Harkema and Kentucky Spinal Cord Injury Research Center. He was impressed with the progress they made using implanted epidural stimulators, from Rob Summers, the first individual implanted with a stimulator for SCI research, to additional participants who experienced voluntary movement, improved cardiovascular function, the ability to stand and improved bowel, bladder and sexual function. Some even took steps because of the implant and specialized therapy developed by the UofL team.

Stifel, now in his 50s, was gratified to see this progress and support the work through the foundation, including “The Big Idea,” a 36-participant study of the benefits of epidural stimulation funded by the Reeve Foundation and led by Harkema. The previous participants were younger and had a shorter length of time since their injury. Although he had been to Louisville to participate in other studies, Stifel believed that because it had been nearly 40 years since his injury, it was unlikely he would be able to participate in the epidural stimulation studies.